Home » About us » Therapists Bernie is a multi-therapist and artist based in Whitstable. Her interest in  holistic therapies developed over the years while raising her family and immersing herself in a busy full time career in education. As an education consultant she frequently worked with people who were suffering from the side effects of  stress in the work place. Inspired to set up an on-site massage company and go part time in her education role, she also worked in a healing clinic at the College of Psychic Studies in South-Kensington.

She is a qualified practitioner in a number of therapies including massage, hypnotherapy, reiki and healing and is a British Wheel of Yoga teacher. Originally an Essex girl, I came to Kent to pursue a career with the Civil Service. I discovered complementary therapies quite by chance, after signing up for an introduction to aromatherapy   course at Adult Ed. This led on to doing a reflexology qualification, again just for interest. After 14 years in the Civil Service I was feeling less than fulfilled, and decided it was time for a complete career change. I gradually learned more therapies, then took the plunge.I am now a qualified practitioner in foot and face reflexology, reflexology lymphatic drainage (RLD), Swedish massage and Indian head massage, as well as being a qualified hypnotherapist and Master NLP practitioner. As well as working at KMSTC, I run a private practice in Canterbury. 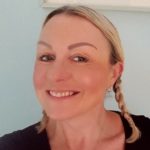 Deborah Noakes
Therapist
Herne Bay-based reflexologist and holistic therapist, Deborah Noakes, has been a member of the KMSTC team since July 2018. After a career in IT as a Network Engineer, Deborah decided to have a complete change of direction and trained as an Holistic Therapist over 15 years ago. A versatile therapist, Deborah can offer everything from Reflexology and Hot Stones Massage to Reiki, Manual Lymph Drainage and Facials. 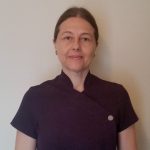 Iuliana, a complementary therapist originally from Romania, discovered more than ten years ago the benefits of reflexology as a great tool to rebalance the body, especially after an illness. This led her to extend her knowledge in massage techniques and reflexology both in her own country and the UK.

Iuliana spent several months travelling around China and whilst there adopted the Far Eastern philosophy of treating the body as a whole which encouraged her to become a Reiki therapist and by practicing in different environments from gym to salon inspired her to use her knowledge to enhance the effects of massage and reflexology on the body and thereby promoting the total well being of each client.

My name is Laura, I’m 35 years of age, married with two boys, a chocolate Labrador, two cats and chickens!
I starting training to be a reflexologist 11 years ago whilst I was working as a family support worker.  I started looking into complementary therapies for the families I was working with and it really interested me so I did some research… I signed up and trained part time alongside full time work and my work families became my case studies (guinea pigs!)
When I qualified in 2007 I began working as a mobile reflexologist. Since then I have trained in many other areas including Swedish body massage, Hot stone massage, Indian head massage, Hand and Foot Reflexology, RLD (Reflexology, Lymphatic Drainage) and a few other beauty treatments.
After I had my first son and he was at nursery, I decided to pursue my dream of aiming to work in a rehabilitation type environment and tying that in with MS, the MS Therapy Centre was top of my list and it really is the only place I want to be.
I look forward to meeting you.