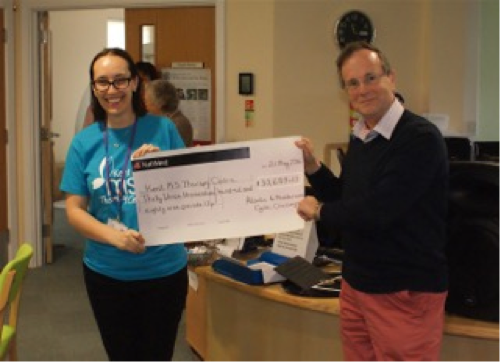 Members and Friends of the Kent MS Therapy Centre gathered together on Saturday 21st May at the Centre’s monthly Coffee Morning to receive the cheque presentation for the final amount of money raised for the Centre from 2015’s epic 305 mile cycle ride from the Atlantic to the Med.

Starting on 17th May 2015 and finishing on the 23rd May, a team of 17 cyclists rode 305 miles through the French Countryside. The route took the cyclists along a network of quiet back lanes and canal towpaths passing through picturesque villages, medieval cities, ancient forests, vineyards and fields of sunflowers.

We use cookies to ensure that we give you the best experience on our website. If you continue to use this site we will assume that you are happy with it.Ok