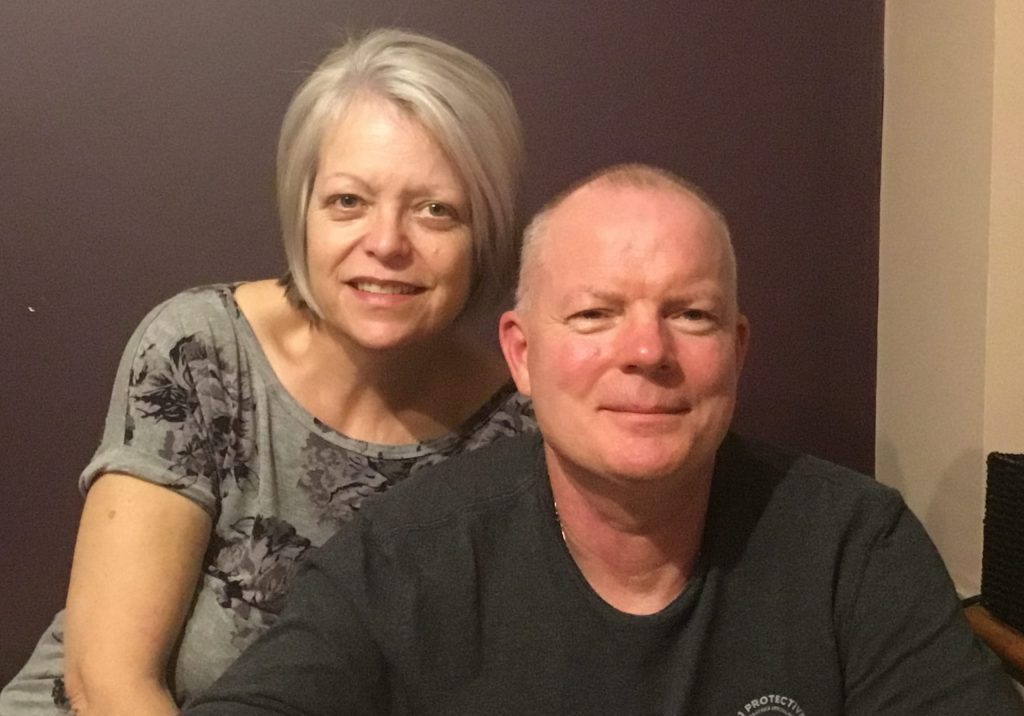 Originally from Essex, Tony Teed and his wife, Kate, moved to Kent for Tony’s work in the print and direct mail industry. Real childhood sweethearts,

Tony and Kate have been together since they were 13 years of age and got married at 17.

Now in their 50s, the last five years have been some of the most challenging of their lives.

It was at Christmas five years ago that Tony noticed his right leg was dragging a little on the walk home, ‘and no, it wasn’t because I had been drinking!’ smiles Tony, ‘I knew straight away that something wasn’t right, but it took me two years to get a proper diagnosis.’ From pain in his legs to the classic brain fog, MS had been taking its toll on Tony both physically and psychologically. “I finally had a lumbar puncture at Guy’s Hospital three years ago. I had to call them to chase up the results and was given the shocking news that I had Primary Progressive MS there and then on the phone. As you can imagine, it was a tremendous blow, but just a fortnight later Kate was diagnosed with breast cancer. We were both utterly devastated. Thankfully, Kate is now in remission and is able to join me on visits to the Centre from time to time when she’s not at work.”

Primary Progressive MS differs from Relapsing Remitting MS because, as the name suggests, from the time the first symptoms present it is progressive. Of course, the progress of the condition varies from person to person, but over time the symptoms grow gradually worse rather than the relapses and periods of remission experienced in the other forms of MS. For Tony, his symptoms include pain, muscle spasticity, disrupted sleep, ‘brain fog’ and fatigue.

I found out about KMSTC online through my own research. I’m still unclear why no one had mentioned the existence of this amazing place to me before. I plucked up the courage to visit and my goodness I’m pleased I did! My fears of finding a depressing place were completely dispelled the moment I arrived. KMSTC is all about having as good a life as possible with MS. The friendship and support I have received has been such a source of strength for me.

Oxygen Therapy has helped so much

Tony completed his first 20 sessions of Oxygen Therapy earlier this year and noticed almost from the first session that he felt more like himself again, ‘I didn’t even realise what brain fog was until it finally started to lift thanks to Oxygen Therapy. My pain has been significantly reduced and I’m sleeping so much better these days’. Kate has noticed a huge difference in Tony’s general wellbeing…

It’s clear that he’s not as fatigued as before, and I feel like I’ve got my Tony back.

In addition to regular weekly top-up sessions in the Oxygen Therapy chamber, Tony finds Hydrotherapy particularly helpful, ‘it’s the only place where I can stand up now; it makes me feel human again. I’m determined to help spread the word about the great work done at Kent MS Therapy Centre, I don’t know how to express my gratitude to the staff, therapists, volunteers and supporters who make it all possible. You have literally given me my quality of life back.’