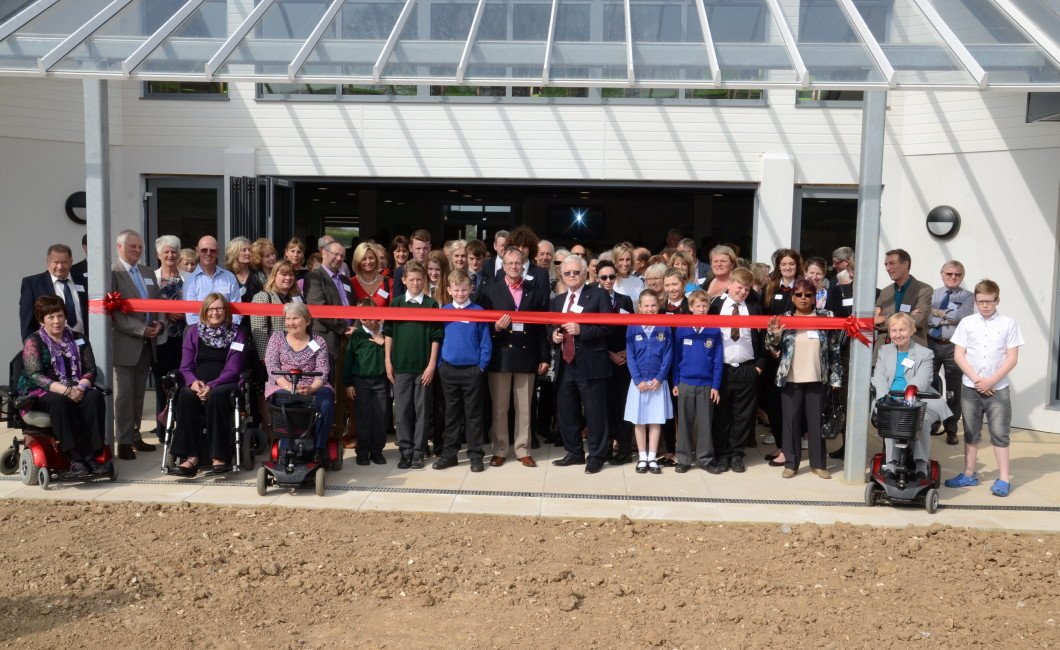 Why stop at one official opening when you can have two? After a wonderful members’ launch for our new Kent MS Therapy Centre in January, we had another excuse to throw a party in our new building on Friday 24 April.

This time, the focus was on thanking the donors and fundraisers who’d helped us raise the £1.6 million – and show them the facilities their precious donations had been spent on.

The list of attendees is too long to list, but we welcomed along individual fundraisers, members of local rotary clubs, and some of the 11 trusts who development funding manager Steph Senior had persuaded to donate.

As well as our patron Frank Brake, who’d offered to match the amount we raised in 2012 and 2013 up to £500,000, there was also the William Brake Charitable Trust; Wolfson Foundation; Ashford Rotary Club; Rotary Club of Sittingbourne; Canterbury Golf Club; Canterbury Rugby Football Club; Barclays Bank and Graham Carter Associates.

We were also happy to see 12 pupils from primary and secondary schools in Ashford and Canterbury, representing the 30 Kent schools who raised over £35,000 through non-uniform days, assemblies and concerts.

Mary Daly’s four children were in the group, including her son, Conor, 12, (see photo above, standing at the bottom of the stairs on the left). We have Conor to thank for the brainwave of involving schools in the fundraising – he had the idea when he was on the school council at St Teresa’s primary school in Ashford.

“We wanted to officially thank fundraisers and show just where the money they raised has been spent.”

Showing off a shiny new centre

Members and trustees who’d played a particular part in fundraising were on hand to show people around the centre, and introduce them to therapists who explained the treatments on offer for those living with multiple sclerosis.

Guests were able to see the Oxygen Therapy Chamber back in situ, plus admire our new specialist gym equipment and hydrotherapy pool. Special thanks to members having hydrotherapy treatment that day – you coped wonderfully with visitors and photographers wandering in and out!

Tony said: ‘Today is our chance to say thank you. We’re so grateful to everyone who’s done anything – big or small – to help us reach our dream of building this new centre.’

If you’re eagle-eyed, you’ll spot two two ribbon-cutting moments. The Canterbury Times photographer didn’t know how long he could stay for so asked Mary, Tony and Frank to pose for a ‘pretend’ one before the actual ribbon was cut!

Getting in the press

A TV crew from ITV Meridian, and photographers from Kent Messenger and Canterbury Times came along to soak up the vibe, too. You can see the ITV clip here, and more pictures from the Canterbury Times here.

We’ll let support manager Karen Middlemiss have the final word about our opening ceremony. As she told the Kentish Gazette: “We wanted to officially thank fundraisers and show just where the money they raised has been spent. Our supporters have donated money from everything from cake sales and non-uniform days to intrepid acts of endurance. But just because we have a new building, the fundraising doesn’t stop. It will cost around £250,000 a year to provide the facilities and run the place. We have around 450 users but can now accommodate more. We know there are around 2,000 MS sufferers in east Kent, with between 12 and 20 new cases being diagnosed every month.”

Thanks to everyone who came along, and of course every single one of you who raised money to open our new centre.

* Credit for all photos: Canterbury Times